Why Reading to Babies Really Matters 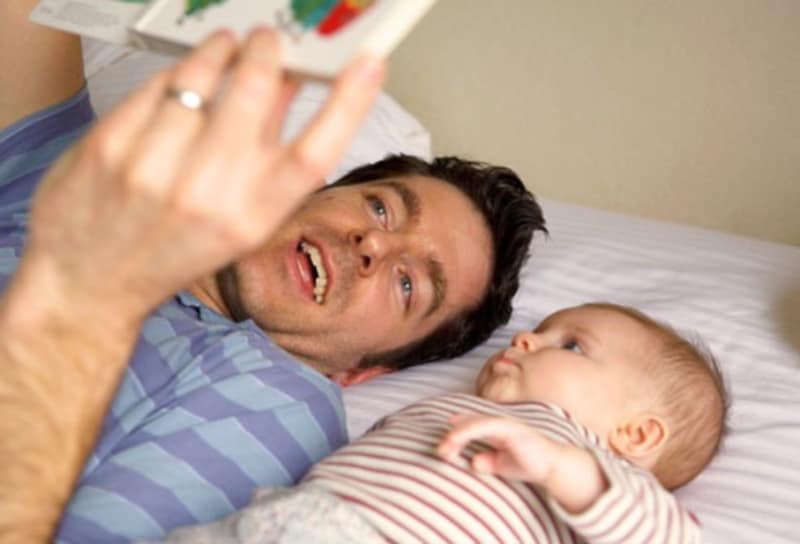 Or, 6 reasons to read to your baby

Reading to babies is great fun and we know it’s important for their development. But why exactly does it matter and when should we begin reading aloud?

The short answer is that reading aloud helps build our babies’ brains and promotes bonding and it can begin at birth.

The slightly longer answer, courtesy of recent developments in neuroscience, is that reading to our little ones strengthens the synapses in their brains which supports learning and other cognitive and emotional functions. These effects are noticeable from birth so it makes sense that we should begin reading aloud to our little ones as early as possible.

So how does this all work?

The human brain processes information by forming networks of specialised nerve cells called neurons. Messages are passed between neurons at connections called synapses. At birth a baby’s brain already has all of the neurons it will ever have.

The brain doubles in size in the first year of life and synapses are formed at a faster rate during these years than at any other time.

Synapses are strengthened by repeated use. The baby’s senses report to the brain about what she sees, hears, feels, smells and tastes in her environment and this input stimulates neural activity, strengthening synapses.

If there’s little input because, for example, a baby is neglected and rarely spoken to or cuddled, there will be less neural activity and the baby’s brain will not develop in a healthy, normal way. Because the synapses are being used only rarely, they will remain weak and more likely to be eliminated in the pruning process which is a normal part of brain development.

Speech sounds stimulate activity in language-related brain regions and these regions of the brain are stimulated when you read to your baby. The more speech – and the more different kinds of speech – your baby hears, the more the synapses between the neurons in that area will be activated and those synapses will become stronger and more permanent.

2. Reading to your baby promotes bonding

When you read to your newborn baby, your little one’s brain responds to the pleasurable, reassuring sound of your voice and to the touch of your body by causing a hormone called oxytocin to be released into her bloodstream via the pituitary gland.

Until recently, the fact that oxytocin is released during everyday interactions such a touching, eye contact and smiling has tended to be overlooked or even forgotten but researchers are becoming increasingly interested in this biological system because it has been shown to promote bonding, healthy care-giving and synchrony between parents and their baby.

When you read to your baby, her body produces oxytocin which makes her feel safe, loved, happy and calm.

This is pretty amazing on its own but there’s more.

Oxytocin also contributes to our ability to handle stress and even to our on-going physical health.

So reading to little ones helps ensure they feel loved, happy and safe and improves their chances of being healthy and able to handle stress as they grow.

3. Reading to babies helps them understand how language works

Babies begin to tune in to the sound of spoken language from birth. At birth, a baby knows her mother’s and father’s voices and may be able to recognise the sounds of stories her parents read to her while she was still in the womb.

But our voices take on a different rhythm and cadence when we read aloud and this provides a richer experience of language to the baby’s rapidly-developing brain. Books often involve different patterns of speech and words that are different from the ones the baby hears around him in everyday speech and these provide added stimulation for the neural activity that’s already taking place in the brain.

The result of all this added brain activity is that the baby is developing an awareness and understanding of the sound structure of the language she will later speak. This awareness is called ‘phonological awareness’.

You can’t see this process happening, of course, and you won’t know it’s happening until your child begins to talk but reading to your baby is known to be one of the best ways to stimulate the development of phonological awareness.

Why does phonological awareness matter?

Phonological awareness matters because it’s an important and reliable predictor of a child’s later reading ability.

In fact, we now have decades of research which shows that children who have problems learning to read at school usually have poorly-developed phonological awareness. On the other hand, children whose phonological skills are well-developed during the pre-school years often learn to read quickly and easily.

So reading aloud to your baby helps him develop important pre-reading skills, even before he can talk.

You might be surprised at how quickly your tiny baby learns new words.

Even if he can’t actually say them yet, by the time your baby’s a few months old, you’ll be able to tell when he recognises familiar words.

Reading to your baby gives him the opportunity to hear new words and to hear words which aren’t necessarily part of the language he hears around him every day. He hears those words repeated when you read familiar books over and over again and also in the books themselves because the best books for babies often involve repetition.

Remember the earlier stuff about how synapses work? The more words a baby hears and the greater the variety of words he hears, the stronger those synapses – which are the building blocks of the baby’s ability to learn – will be.

Repeatedly hearing new words and words used in interesting ways builds vocabulary and stimulates activity in the language-related regions of the brain, which in turn strengthens the synapses which support learning, memory and other cognitive abilities.

5. Reading to your baby helps develop his communication skills

Babies learn to communicate when caregivers tune in to their signals and respond in caring and appropriate ways.

These interactions are often referred to as ‘serve and return’ interactions and they’re important because they actually shape the architecture of the baby’s brain.

So what do these ‘serve and return’ interactions actually look like?

They can look like a baby babbling, gesturing or crying and mum or dad responding by making gentle eye contact, talking to the baby or offering a cuddle.

They can look like a parent asking their baby a question and the baby making eye contact and responding with a word, a smile or a gesture.

They can look like a parent reading to a baby, pausing to ask “I wonder what’s going to happen next?” or “where is Spot hiding?” and the baby babbling or pointing to the pages in response.

Reading to a baby provides lots of opportunities to enjoy these ‘serve and return’ interactions. They’re enjoyable for the baby so they cause the baby’s brain to release oxytocin and they also build and strengthen the neural connections in the baby’s brain that support the development of communication and social skills.

6. Reading to babies fosters a love of books, stories and reading

This one is pretty self-explanatory.

When you read to your baby and ‘chat’ together about the book, he quickly learns to associate books and reading with feeling happy, safe and loved, via that jolt of oxytocin he experiences.

You snuggle and read, oxytocin is released into your baby’s bloodstream and the connection is made. This connection is reinforced every time you read aloud to your little one and, before you know it, you’re raising a reader.

I watched this process happen with my own three children and with my five nephews and it’s a pretty magical experience.

So there you go.

None of this is really new information, I guess.

Except, perhaps, for the neuroscience bits.

Most of it is stuff parents and grandparents have known intuitively for many years but I like that the neuroscience helps to explain why reading to babies is such a great thing to do and how it works to grow the baby’s brain.

I hope you find it helpful.

So there you go.

None of this is really new information, I guess.

Except, perhaps, for the neuroscience bits.

Most of it is stuff parents and grandparents have known intuitively for many years but I like that the neuroscience helps to explain why reading to babies is such a great thing to do and how it works to grow the baby’s brain.

Do you read to your baby? What do you think is the best thing about reading to your little one? 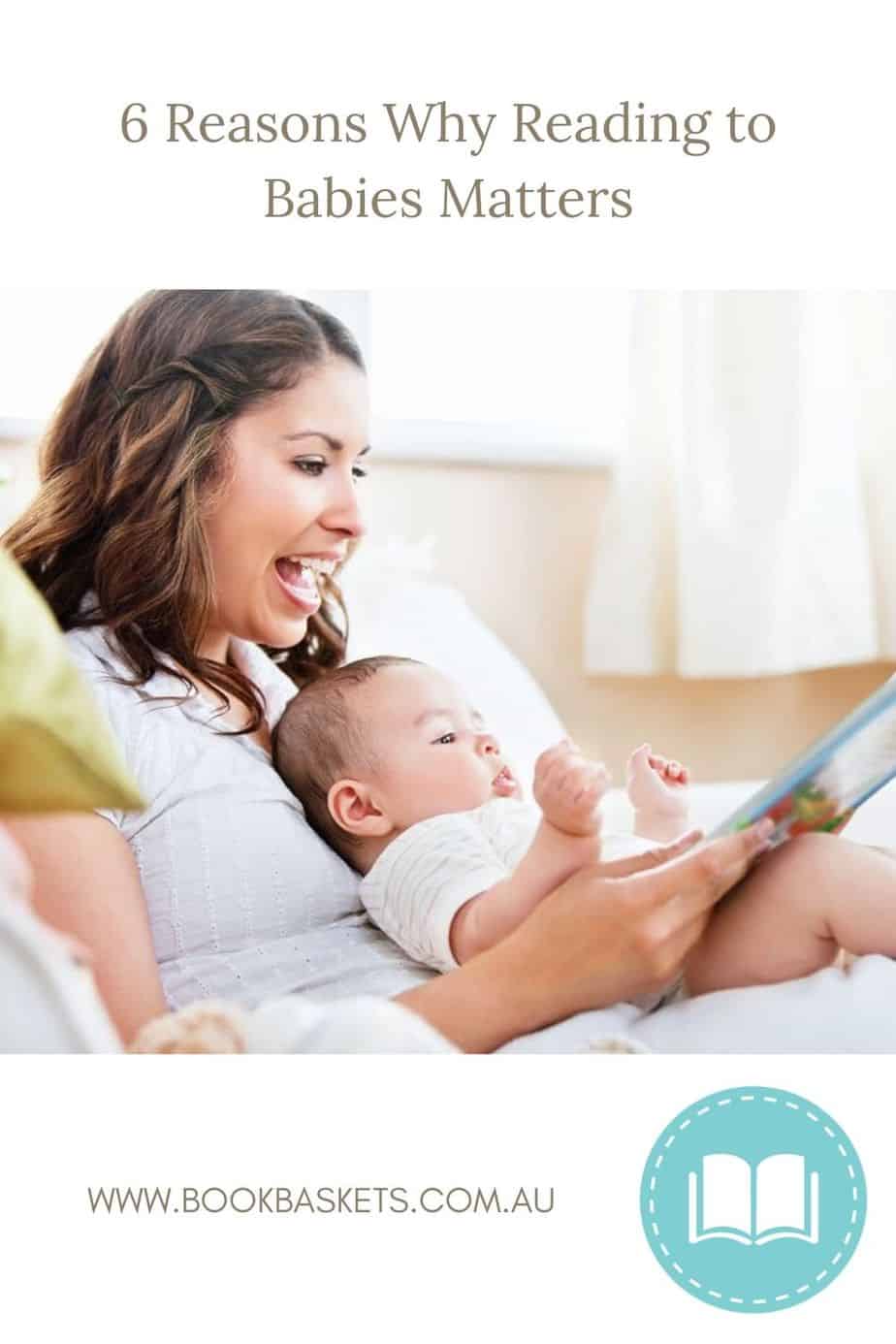 Do you read aloud to your baby?

Does your little one enjoy it? 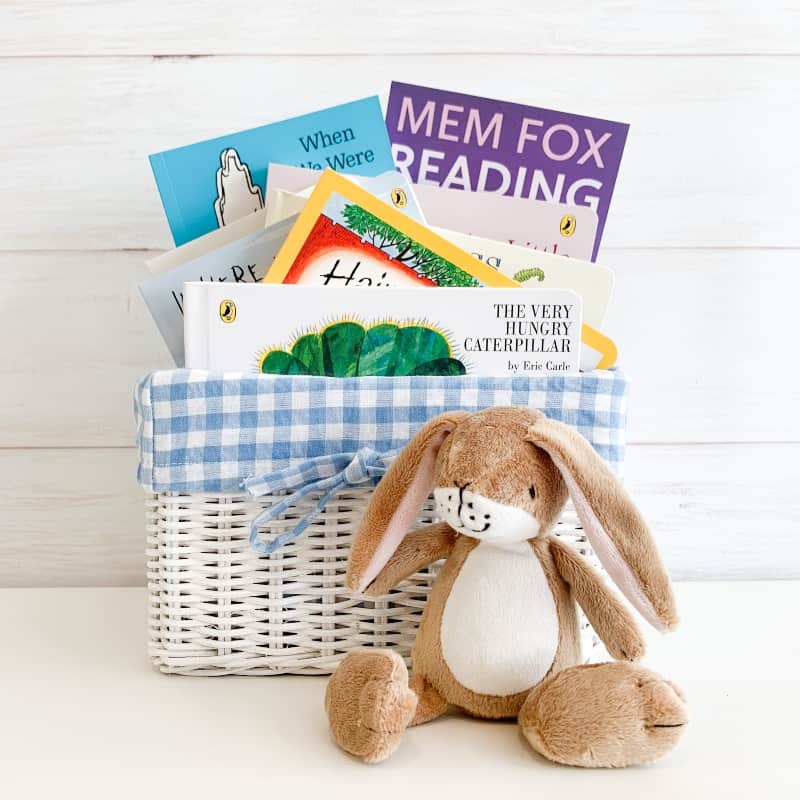