Our understanding of Australia Day and how we celebrate it has changed a great deal since I was a child. In the 1970s, 26 January was a day to celebrate the ‘founding’ of Australia – the day when the First Fleet arrived on the shores of the land they’d deemed terra nullis, literally ‘nobody’s land’.

Of course it was not nobody’s land – not in 1770 when Captain Cook ‘discovered’ it and not in 1788 when the First Fleet arrived. We now know that the ancestors of Aboriginal people lived on this land for at least 60,000 years. In fact, archeologists believe that Aboriginal Australians are the descendants of the first people to leave Africa 60,000-75,000 years ago, making them the oldest continuous culture on our planet.

Given that the land we now call Australia was already occupied in 1788 when the English arrived to create their convict settlement, Aboriginal people today view this as an invasion. They regard 26 January as a day of mourning and see the celebrations non-indigenous people traditionally hold on 26 January as culturally insensitive.

So how do we begin to discuss all this with our children?

Well, if you’ve been following me for a while, you’ll know that I think picture books are a great way of opening up conversations about just about any subject. They’re particularly great for broaching tricky topics and concepts that may seem way too hard to talk about with children. And, in fact, as a teacher and as a mum, it’s been my experience that children are interested in – and capable of understanding – a lot more than we might think, even when it comes to complex and nuanced issues.

So I guess it goes without saying that I think we should be talking about Australia Day with our children and that’s why I’m writing about these three picture books. All three are written with children aged from about six to about 10 years of age in mind but, like most really good picture books, their appeal is actually a lot wider than that. As an adult, I love them and I’ve used them in the classroom with children up to the age of 12 with great success. Many 3-6-year-olds will also enjoy them so do give them a try if you have a little one in this age group.

Before we move on, here are a few questions people commonly have about Australia Day.

What is Australia Day?

Australia Day is an Australia-wide public holiday which commemorates the establishment of the first permanent European settlement on the continent of Australia.

What day is Australia Day?

Australia Day occurs on 26 January every year. On that day in 1788, Captain Arthur Phillip, commander of the First Fleet of eleven convict ships from Great Britain, arrived at Sydney Cove and raised the Union Jack to signal the establishment of the colony.

Has Australia Day been moved?

Despite calls for Australia Day celebrations to be moved to another date, 26 January continues to be marked around the country as Australia Day.

Nevertheless, the nature of the holiday and the way we celebrate it has definitely changed over the years. It is now widely understood that the anniversary of the day the First Fleet arrived is a difficult symbol for Aboriginal and Torres Strait Islander people who see it as a day of sorrow and mourning. Although many people still choose to mark the day with barbeques or a day at the beach, Australia Day has evolved into a celebration of Australia that reflects our nation’s diverse people.

Australia Day always falls on 26 January and the day is always a public holiday in all Australia states and territories. In 2022, Australia Day falls on a Wednesday.

Before 2011, if Australia Day fell on a Saturday or Sunday, the following Monday was granted as a public holiday. This is no longer the case in most states. 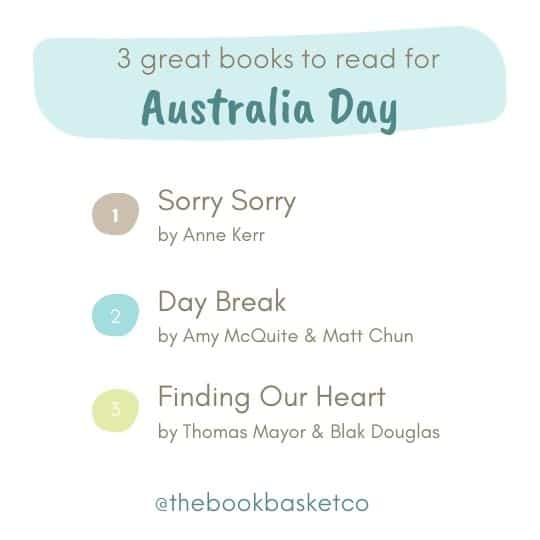 How to Read These Picture Books for Australia Day

Today, Australia Day is, for most Australians, a day of remembering and reflection. Rather than celebrating the arrival of the First Fleet and the establishment of an English colony, it’s a day when we remember and reflect on the history of our country, all 60,000 years of it. It’s a day when we celebrate this land and the lives we share here – with joy, with gratitude and with respect for the First Peoples who lived here for so long before the first English people came.

There are only three picture books in this collection of suggested picture books to be read before – and perhaps on – Australia Day. My suggestion is that you read them in the order in which I’ve reviewed them.

Sorry Sorry tells the story of the First Fleet from the point of view of the First Peoples. It shows the way the English colonists mistreated the First Peoples, our eventual realisation of how badly our ancestors betrayed them and how we collectively – after a very long time – said ‘sorry’.

Having read about and discussed in Sorry Sorry how the English colonists effectively stole their land, Day Break shows a contemporary Aboriginal family remembering on 26 January. The book presents a way of thinking about and celebrating Australia Day that most Australian children won’t have come across before, thereby extending the conversation and children’s understanding of Australia Day.

Having learnt about the origins of Australia Day and how some Aboriginal families mark the day, Finding Our Heart invites children to consider where we – all of us – go from here. The book is an appeal to children about listening to First Nations voices and to our own hearts so we can move forward together.

Read together and in this sequence, I think these three books really help to get children thinking about Australia Day and its meaning and plant the seeds for a deeper understanding as they grow up. Sorry Sorry is one of my favourite books to share with children. It’s a great way of getting the conversation started about Australia Day – about what it commemorates and why it’s important – with ideas for discussion and activities included in the back of the book.

Reading Sorry Sorry with children is a way of exploring these questions:

What happened on 26 January 1788? Why was it important?
How did the First Nations people feel about the arrival of the English people?

I’ve been reading Sorry Sorry with the children I teach for a few years now and it never fails to engage them. The deceptively simple language and the gorgeous illustrations make it the perfect book to use as a prompt to get children thinking about how the Aboriginal people might have felt when their land was taken away and they were treated so badly. It effectively offers children a different perspective on Australia Day, helping to nurture the development of empathy and offering hope for the future. 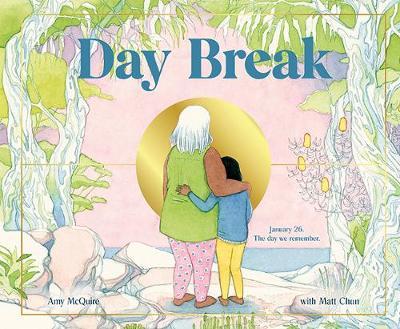 Day Break was new in 2021 and it’s definitely worth seeking out. It continues the discussion about what happened on 26 January 1788, what it meant for Aboriginal people and what the day means to Aboriginal people today. The author, Amy McQuire, is a Darumbal and South Sea Islander woman from Rockhampton in Central Queensland.

Told from the point of view of a First Nations little girl, Day Break begins with the little girl’s confusion around Australia Day and why her father doesn’t hang her painting of the Australian flag on the family’s fridge, as he has done with her other paintings. Her teacher has said that “white men discovered our country” but her dad says “we were already here. For tens of thousands of years.” On 26 January, the little girl, her dad and her grandmother make their way back to Country to remember in their own way, drawing strength from being together and from sharing stories as they move through a shifting landscape.

Day Break is a lovely (and important) story to share on its own but I think that sharing it with your child after reading Sorry Sorry creates an even richer experience for young ones. This is because Day Break builds on the knowledge about Australia Day and the events it commemorates gained in Sorry Sorry by turning the focus onto what Australia Day means to First Nations people today. And, in doing so, it brings in themes of Indigenous survival and resistance in a way that young children can grasp, planting the seeds for a deeper understanding as they get older.

Finding Our Heart is a story for young Australians about the Uluru Statement. It was a 2020 release written by Thomas Mayor, a Torres Strait Islander man born on Larrakia country in Darwin.

So what is the Uluru Statement?

The Uluru Statement from the Heart (Uluru Statement) is a statement issued on 26 May 2017 following the First Nations National Constitutional Convention which brought together 250 Indigenous representatives from across Australia. The Statement represents a historic consensus of Indigenous leaders calling for structural reforms, including constitutional change to establish a Voice to Parliament enshrined in the Constitution.

I think Finding Our Heart is the perfect third book to follow on from Sorry Sorry and Day Break because it’s essentially a book about listening to the voices of First Nations people and working together to understand Australia’s past so we can move forward into our shared future. While 26 January is not mentioned, the book builds upon what children have learnt in Sorry Sorry and Day Break,  exploring the history of First Nations peoples’ attempts to be heard and explaining some of the issues and challenges our country faces as a result of the actions of our ancestors.

Finding Our Heart is a very hopeful and inclusive book which is a clear appeal to all Australian children to take part in the reconciliation process. It includes the full text of the Uluru Statement in the back of the book, as well as some explanatory notes and some suggestions for children about “How you can help to find our heart”.

Do you have a favourite Australia Day picture book?

Have I missed any books you think are important to read in the lead-up to Australia Day?