6 Books About the Origins of Valentine’s Day for Kids St Valentine’s Day is widely celebrated throughout England, Europe, North America, Australia and New Zealand but how many of us really know anything about the origins of Valentine’s Day?

St Valentine was a Christian martyr and is revered by the Catholic church as a saint. We know he lived in Rome and died in the third century but beyond that there’s not much reliable information about him and there are different stories about how and why his name came to be associated with love and romance.

The books on this page tell some of these stories and provide an interesting window into the origins of Valentine’s Day. A couple of the books adopt a strongly religious perspective while others tell the story from more of a historical perspective.

If you’re a teacher or a parent, you can use these books to explore the origins and customs associated with St Valentine’s Day. Even if you’re not religious, the books provide some interesting background on the day we now often call simply ‘Valentine’s Day’. They can also be used as a focus for discussions about legends, stories and historical facts, the differences between them and how the lines between them can become blurred over time.

What are the origins of Valentine’s Day?

The first official Saint Valentine’s Day was declared on 14th of February by Pope Galasius in 496 in memory of a 3rd century martyred priest in Rome. It is not known for sure whether the Pope was honouring the priest called Valentine or one of two other priests who were also martyred around the same time and whose names had also come to be associated with 14 February. The truth is lost in history.

Whatever the truth of these earliest origins may be, Saint Valentine is now strongly associated with 14 February so it’s interesting to explore the legends surrounding his life.

There are two main stories told about Saint Valentine and how he came to be martyred. Both stories describe Valentine as a Roman physician – and possibly also a priest – who lived and died in the third century AD (around 270 AD). This was a time when Christians were being openly persecuted, persecution which was sanctioned by the emperor, Claudius II Gothicus. Valentine was killed in 270 AD in Rome on the orders of the Emperor.

So why did the Roman emperor have Valentine killed?

According to one legend, Valentine defied the emperor who had forbidden his soldiers to marry. The reasons given for this order vary but, by marrying the soldiers and their sweethearts, it is said that Valentine enraged the emperor who decreed that he should be killed.

Some stories state that Valentine was killed because he refused to pray to the Roman gods.

Another legend is less clear on why Valentine was imprisoned but tells the story of a young girl whose blindness was cured by Valentine. While he was in jail (possibly for marrying soldiers against the emperor’s wishes), the little girl was brought to visit Valentine by her father who was one of the jailers and wanted to thank Valentine for healing his child. Valentine and the child wrote to one another, with Valentine signing his last letter to her ‘from your Valentine’.

A variation on this legend is that the jailer’s daughter was not a young girl cured by Valentine but a young woman Valentine met while he was in jail and with whom he fell in love. He signed his letters to her ‘from your Valentine’.

Whatever the truth of these legends, St Valentine’s Day has been celebrated as a festival of lovers since at least the 14th century and Valentine is regarded by Christians as a martyr: someone who was killed because of his Christian faith. Catholics regard Saint Valentine as the patron saint of lovers.

What is Valentine’s Day?

Who was Saint Valentine?

Saint Valentine was a Christian bishop – or possibly a priest – and also a physician in ancient Rome.

When is Saint Valentine’s Day?

Saint Patrick’s Day falls on 14 February every year, the anniversary of the day in 270 when Saint Valentine is said to have died. Saint Valentine’s Day is not a public holiday in Australia. If you’re looking for a book about the origins of Valentine’s Day that adopts a more historical (rather than religious) approach, Robert Sabuda’s Saint Valentine is a good choice. It does a good job of explaining who Valentine was and describing the historical context in which he lived, choosing to focus on his profession as a doctor and a Christian, rather than on the possibility that he may also have been a priest. It covers the fact that the Romans, who worshipped many gods, discriminated against the Christians (who worshipped only one god) and tells how his faith ultimately led to his death when the Emperor ordered that Christians be imprisoned and executed. When the jailer whose daughter’s blindness he has cured, comes to visit and says there is nothing he can do to help, Valentine sends a letter home with him to his daughter that reads “from your Valentine”. I really like the way this book is written.  It’s not too simplistic, but neither is it too deep or heavy for a very young audience. A historical note at the end of the book explains the reason behind Valentine’s death, how he became a saint and how the holiday of Saint Valentine’s Day came to be.
Suggested for ages:  5-10 years

2. The Story of Valentine’s Day 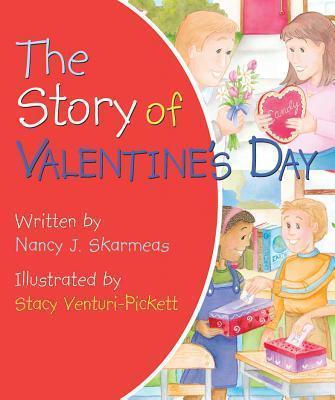 Nancy Skarmeas’s The Story of Valentine’s Day is a very simple board book which tells the story of how Valentine healed a little girl of blindness and defied the emperor to marry his soldiers. It portrays the healing of the little girl’s blindness as a miracle resulting from Valentine’s prayers and does not mention Valentine’s death. It mentions Rome’s ‘King’ (he was actually the Emperor) and ends with the message: ‘we remember that all god’s children should love one another’.
Suggested for ages: 3-6 years

3. The Story of Valentine’s Day I’m not a huge fan of the cover of this book but the book itself is actually very good, especially if you’re keen to delve right back into the origins of the festivals that preceded Valentine’s Day. The book mentions the fact that the time around 14 February has been associated with love and fertility for thousands of years, which I found really interesting. Apparently, it was the time of year when the ancient Greeks celebrated the sacred marriage between Zeus and Hera. it was also the time of the Ancient Roman festival of Lupercus, Lupercus being the god of fertility. This book goes on to tell the different stories – and variations on the story – of Saint Valentine. It also describes the evolution of the holiday and its celebrations in Europe during the Middle Ages and beyond and describes how and when it came to be celebrated in America. I found all this fascinating. This book is quite detailed and take a historical approach, rather than a religious approach, ending with the observation that St Valentine’s Day is a good day to think about how old customs and beliefs can mix and meld over time and develop into something quite new. Directions for making a paper valentine and sugar cookies are given at the end of the book.

4. The Story of Saint Valentine This version of The Story of Saint Valentine is a very simple book, with short sentences and straightforward artwork suitable for younger children. It tells the story of how, in about 269 AD, Emperor Claudius II of Rome declared that soldiers were not permitted to marry and that a priest by the name of Valentine defied the law and became an advocate for love and marriage. The book doesn’t mention Saint Valentine’s martyrdom and in fact implies that the Emperor’s heart was changed by Valentine’s goodness, although the legend of Saint Valentine says that the Emperor had him killed. The book has been criticised for this and for the very simplistic way it tells the story, however, if you’re looking for a very simple story for younger children, this might be a good choice.

5. The Story of Saint Valentine: A Story of Courageous Love The Story of Saint Valentine contains 16 pages for children to colour. The story of the man who married couples in secret in defiance of the Roman Emperor’s decree is simply told in sections of text which appear beneath each illustration. This book is written for young Catholics and is very much a religious story. Ann Tompert’s Saint Valentine seems to be currently out of print but you may be able to find it in your library. The illustrations are really lovely and it’s suitable for a wide range of ages (including adults) so it’s worth tracking down a copy, if you can. Ann Tompert strikes a nice balance between fact and legend and clearly distinguishes between the two, weaving the most enduring stories of Valentine into a cohesive examination of the benevolent man who is said to have sent messages of love to Christians in prison during the Roman persecution. The watercolor illustrations by Kestutis Kasparavicius evoke the sense of ancient Rome and help to make this an engaging glimpse of the man whose life remains largely a mystery.
Suggested for ages:  5-12 years Shop our book gift baskets for babies and young children: Do you celebrate St Valentine’s Day with your children or with the children you teach?

Do you have another book about the origins of Valentine’s Day to share? I’m Felicity, a mum of three young adults and a primary school teacher in Sydney, Australia. I’m passionate about children’s literacy and about the potential of books and reading for enriching young lives, starting in infancy. As well as sharing my favourite books on this blog, I also create and sell gorgeous book-ish gifts for little ones. You can check out my Book Gift Baskets and my Little Book Gifts here. Or you can just click on the tabs at the top of the page.

The Book Basket Company is situated on Dharug land. We acknowledge the Traditional Owners of this land, the people of the Dharug nation, and pay our respects to Elders past, present and future.

Join us to receive info about new gifts, reading aloud and great books for little ones straight to your inbox.